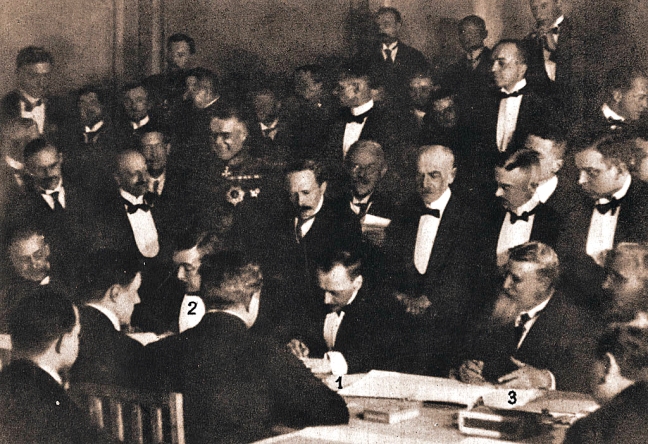 Following the October Revolution, the Bolsheviks sought to make good on their promise of peace, land, and bread for all. The new Communist Regime opened up peace negotiations with Germany, Austria-hungry, and the Ottoman Empire. The Treaty of Brest Litovsk, named after a small Ukrainian town, was the ensuing peace document that developed out of the negotiations. Bellow are the fourteen articles listed in the original document. 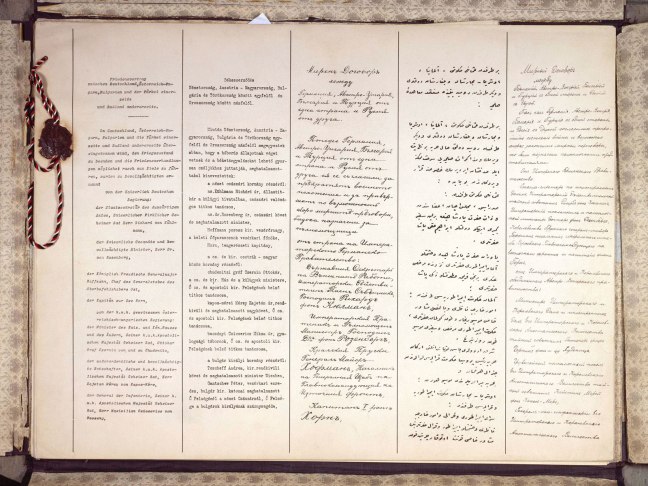 ARTICLE 1. Germany, Austria-Hungary, Bulgaria, and Turkey on the one hand and Russia on the other declare that the condition of war between them bas ceased. They have decided to live in peace and accord in the future.

ARTICLE 2. The contracting parties will refrain from all agitation or propaganda against the governments or all state and military institutions of the other side …

ARTICLE 3. The territories lying to the west of the line determined by the contracting powers and which formerly belonged to Russia will no longer be under her sovereignty. Russia gives up all interference in the internal affairs of the said countries. Germany and Austria-Hungary intend to determine the future fate of the said territories with the consent of their inhabitants.

ARTICLE 4. Germany is ready, as soon as general peace is established and Russian demobilization will have completely taken place, to vacate the territories lying east of the line mentioned in article 3. Russia will do all in her power to have the provinces of eastern Anatolia promptly evacuated and returned to Turkey. The territories of Ardakhan, Kars and Batum will also be cleared without delay of Russian forces .

ARTICLE 5. Russia will, without delay, proceed to demobilize her army, including those army units newly formed by her present government. Moreover, Russia will either bring her warships into Russian ports and keep them there until general peace is concluded, or will disarm them at once.

ARTICLE 7. The contracting parties bind themselves to respect the political and economic independence and the territorial inviolability of Persia and Afghanistan.

ARTICLE 8. The prisoners of war of both parties will be allowed to return home .

ARTICLE 9. The contracting parties mutually renounce all indemnifications for their war expenses, that is, for government expenses for conducting the war, including all requisitions made in the enemy’s country.

ARTICLE 10. Diplomatic and consular relations between the contracting parties are resumed at once after ratification of the treaty of peace. The question of allowing consuls of both parties free entrance will be decided by a separate agreement.

ARTICLE 12. The reestablishment of public and private legal relations, the exchange of war and civil prisoners, the question of amnesty as well as the question regarding merchant ships which have been seized by one or the other side, will be provided for in separate treaties with Russia, which form an important part of the present peace treaty, and as far as it is possible come into force simultaneously with the latter.

Ultimately the treaty represented unfavorable and extremely harsh reparations and concessions for the new Russian Government. In short, Russia was forced to give up nearly all lands that once made up the empire, immediately halt all military mobilization, and pay an astronomical amount of war reparations. The treaty was widely opposed by many in the educated class to include some Bolsheviks. This sentiment is apparent in the following statement from the Russian Delegation at the Brest-Litovsk peace conference on February 10, 1918.

“In the name of the Soviet of People’s Commissars, the Government of the Russian Federated Republic hereby informs the governments and peoples warring against it, as well as the Allies and neutrals, that in refusing to sign the annexation peace Russia at the same time declares the war with Germany, Austria-Hungary, Bulgaria, and Turkey at an end. Orders for general demobilization have already been issued.”

The above quote highlights the Soviet’s discontent towards the required peace reparations. They even went so far as to say they will not sign the treaty, but still planned to drop out of the war. Ultimately, the Russian regime was forced to sign the Treaty of Brest Litovsk for fear of further German and Austro-Hungarian aggression. The treaty was later terminated when Central Powers signed their own peace agreement with the Allied Powers.

At the begging of the semester we talked about the pride and sense of nationalism shared amongst Russian people. I believe the Treaty of Brest Litovsk represents a clear example of that national pride effecting political decisions. After the Bolsheviks took power, it was all but clear that they needed to get out of the World War I if they hoped to maintain power. Civil War and food shortages threated to push the country into further Anarchy. Knowing they needed to make peace, the Bolsheviks still refused to sign the treaty until forced by threat of further aggression. I believe the same sense of national pride and yearning for relevance effects Russian politics still to this day.

4 thoughts on “Trading Space for Time”